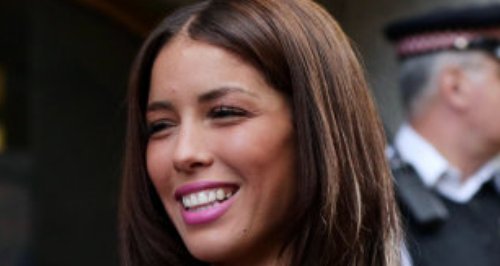 A student from north London who tried to smuggle €20,000 onto a flight to Turkey in her knickers has been cleared of funding extremist fighters in Syria.

But her friend who allegedly asked her to be a "trusted courier" for the money collapsed in tears in the dock as she was found guilty of the offence in the first prosecution of its kind.

The Old Bailey heard Nawal Msaad, 27, (pictured) attempted to take the stash of 20,000 euro (£15,830) in rolled-up notes on a flight to Istanbul from Heathrow in January.

She did it for her friend Amal El-Wahabi, also 27, whose husband Aine Davis, 30, asked for the money, having left the UK to pursue a jihadist cause in Syria in July last year.

The plan was scuppered when Msaad was stopped at the departure gate and she produced the cash, which had been hidden inside a condom but had fallen out into her pants.

Msaad, of Holloway, north London, and El-Wahabi, of north west London, denied the charge of making money available with "reasonable cause to suspect that it would or may be used for the purposes of terrorism".

The jury of six women and five men cleared Msaad but convicted El-Wahabi by a majority of 10-1 after deliberating for 23 hours and 15 minutes over five days.

El-Wahabi is the first Briton to be convicted under terror laws of funding jihadi fighters in Syria.

After a short break, trial judge Nicholas Hilliard QC warned El-Wahabi she faced jail when she is sentenced on September 12.

He told her she was in a "completely different category" from her partner Davis but added: "I do not want there to be any misunderstanding. On the face of it, an immediate custodial sentence appears inevitable in this case.

"This was a substantial amount of money destined on the evidence straight to the hands of a dangerous extremist who was engaged in violent jihad with all the terror and misery that causes."

He said since that the case was about the "covert transfer of cash out of the country", El-Wahabi should be remanded in custody to ensure her attendance in court for sentence.

Meanwhile, Msaad, who was dressed in black and white striped shorts and a black top, hugged friends outside court.

In a brief statement to waiting reporters, she said: "I'm relieved to be found not guilty. I will be forever thankful to my family. I'm physically drained and mentally weak.

"I would like to thank my legal team for getting me through this. I'm grateful to the 11 jurors who unanimously found me not guilty. The last eight months have been surreal."

Asked if she would be returning to university now, she appeared tearful as she replied: "I don't know."

She walked away without commenting when a reporter asked her if she had anything to say about her friend El-Wahabi who had been convicted.

During the trial, jurors were told the women were both London-born of Moroccan descent and had been close friends for years.

Msaad, who had been studying human resources at London Metropolitan University in Aldgate, agreed to take the cash on the promise of 1,000 euro in expenses, jurors heard.

When she was stopped at the departure gate on January 16 she said the three-day trip to Istanbul was a "short break" to buy gold for her mother.

The court heard the arrangements were made in the days before in phone calls and WhatsApp messages between El-Wahabi, her husband Davis and Msaad.

The same day Msaad was arrested, police went to El-Wahabi's home where they seized mobile phones and computer equipment.

They revealed Davis, who used the Muslim name Hamza, had kept in regular contact with mother-of-two El-Wahabi since he left London to pursue a jihadist cause.

The jury was shown a stream of Skype texts between the couple in which El-Wahabi initially complained of being lonely and begged him to come back.

They argued over his suggestion that he might take a second wife while he was away, the court heard.

El-Wahabi told him: "I'm so upset with you. If you loved me like you say you do, why would you do something that will depress me and hurt me? Don't you think you have put me through enough?"

When El-Wahabi said she was "not strong enough" without him, Davis told her to "be patient", adding: "You think I spent two months on the road to get where I am to come back? (rofl)."

By December, the defendant, who was living on benefits, was coming round to the idea of joining him wherever he was, the court heard.

The jury was also shown a "selfie" Davis sent her, as well as videos containing jihadist propaganda.

Prosecutor Mark Dennis QC said: "It is plain from images that he had sent to her that Davis had fulfilled his desire and was now with jihadist fighters and was supporting the familiar black flag adopted by the extremist jihadist terrorist groups in various countries in that troubled part of the world."

But El-Wahabi denied knowledge of any terrorist activities or their funding.

In her defence, she denied Davis was in Syria saying he left Britain to look for work and to get away from drug dealing.

When Msaad went into the witness box, she accused her co-defendant of "stitching" her up by not telling her where the money came from.

She insisted she had never meant to smuggle cash abroad to bankroll terrorism.

Throughout her trial, Msaad, who said she was Muslim but not particularly religious, wore fashionable outfits with high heels and bright pink lipstick which on one occasion drew admiring glances from a male defendant in another case at the Old Bailey.

Davis, 30, who was born in London with roots in Gambia, met El-Wahabi at a local mosque and become increasingly interested in Islam six or seven years ago, the court heard. His current whereabouts are unknown.