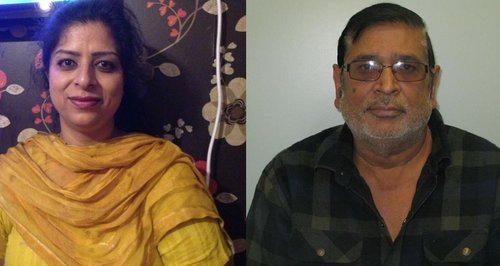 A man from Forest Gate who hired a drug addict to kill his wife has been jailed for at least 24 years.

Amina Bibi (pictured left) was stabbed more than 70 times in September 2013 and her 11 year old son found her body.

Mohamed Ali, 65, (pictured right) from George Carver House, Station Road has been given a life sentence.

He had approached Frederick Best, 47, from Kebble Terrace, Forest Gate, saying he would pay him £1,000 for carrying out the murder. Best attacked Mrs Bibi on Friday, 13 September 2013 at around 8.30am.

Mrs Bibi, 43, was stabbed in excess of 70 times in the attack by Best at the home she shared with Ali.

It is believed that Best was disturbed during his frenzied attack after the eldest of Mrs Bibi's two sons came back from school because he had forgotten his books. The 11-year-old boy found his mother dying in a pool of blood. She was pronounced dead at the scene.

Detectives identified Ali on CCTV speaking with another man outside the flat prior to the murder taking place.

Officers seized Ali's two mobile phones. One phone contained family and friend's contacts but the other - on examination - held only numbers in Pakistan and a UK mobile phone number called frequently at the time of the murder..

This turned out to be the number of Best who also matched the description of the male seen speaking to Ali on the CCTV prior to the murder taking place. Best was arrested at his home address on 17 September 2013. Ali was arrested soon afterwards.

The pair were both charged with the murder of Amina Bibi on Thursday 19 September.

The court heard that officers discovered Ali was conducting an affair with his sister-in-law in Pakistan and had also built up a large amount of debt.

Mrs Bibi had significant savings in the house and officers believe both factors could have been a motive for Ali to have his wife murdered.

He denied in court that he was having an affair.

Ali knew Best from when he owned a shop in Woodgrange Road, Forest Gate in the early 1990s. Best used to hang around the shop and Ali knew that Best had a drugs habit.

They lost touch but met some 15 years later in 2013 by chance and swapped numbers. It was then that police believe Ali hatched a plan to have his wife killed by Best.

The crack cocaine addict claimed in interview that he was paid £1,000 to burgle Ali's flat. Best stated that he did not kill Amina Bibi, he said that he went into the address to carry out the fake burglary and found her lying on the floor covered in blood. He alleged that someone had attacked her before he entered.

On sentencing, His Honor Judge Hone QC said of Ali: "You planned this with incredible care. You lied to everyone, even your own sons. You have shown no real remorse."

Of best he said: "You have shown not a glimmer of remorse or shame"

Detective Chief Inspector Dave Whellams, of the HMCC, said: "This was a cold and calculated act planned and devised by Mohamed Ali to have the mother of his two children killed.

"He recruited Fred Best, a man with a drug dependency, to carry out the murder for the price of some jewellery and cash. He arranged for Best to attend his flat on the morning in question where he left open the communal doors allowing Best access to his flat.

"He also gave Best a key to his front door to gain entry to the flat while Ali used the 'school run' to provide himself with an alibi, secure in the knowledge that his unsuspecting wife was at home alone. Within a minute of Ali leaving with his youngest child, Best entered and carried out a ferocious attack on Mrs Bibi, stabbing her approximately 70 times.

"It was during this attack that Best was disturbed by the eldest child - who had returned to the home address on realising that he had forgotten his home work. The sound of desperate knocking on the window and front door caused Best to panic and flee. Unfortunately Amina Bibi's son will have to carry with him the tragic memory of the events of that day forever.

"Although Ali played the part of a loving and concerned husband and father, his story soon began to unravel. Both he and Best were arrested within days of the offence and although they tried to cover their tracks it soon became apparent that they were responsible. This was a complicated investigation solved by hard-working and dedicated officers.

"This is a tragic case which has left two children without their mother and father, and also with them the knowledge that one of the parents was responsible for the death of the other. I only hope that over time the memory of it will fade in the minds of the children and that they will be able to overcome this tragic and brutal incident."