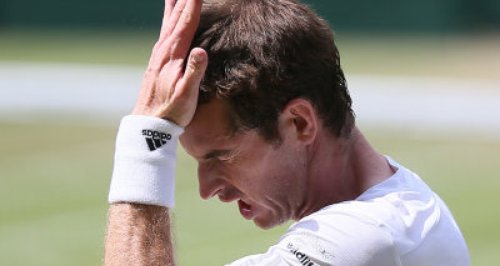 Defending champion Andy Murray has crashed out of Wimbledon, losing in straight sets to Grigor Dimitrov.

The British number one lost his quarter-final 6-1 7-6 (7/4) 6-2 to the Bulgarian 11th seed - who had never previously made it to the semi-finals of a grand slam tournament.

As the Duke and Duchess of Cambridge looked on from the Royal Box, Murray won only one game in the first set before being narrowly defeated in a second set tie-break.

He looked a beaten man at points during the third set and Dimitrov, whose girlfriend is Russian player Maria Sharapova, wrapped the game up after little more than two hours.

It comes just a year after Murray became the first Briton to win the Wimbledon singles title since Fred Perry in 1936.

Speaking after the match, Murray said he was "disappointed" with his performance.

"The start wasn't good enough. He played a very solid game and made very few mistakes. I just wish I'd played a little bit better and made it difficult for him at times.

Dimitrov said he was "excited" to have made it through to his first grand slam semi-final.

"I'm just happy to get through that match in straight sets," said the 23-year-old.

"It's never easy coming to play against Andy, especially in front of a home crowd. I've been pretty fortunate today and I'm just happy."