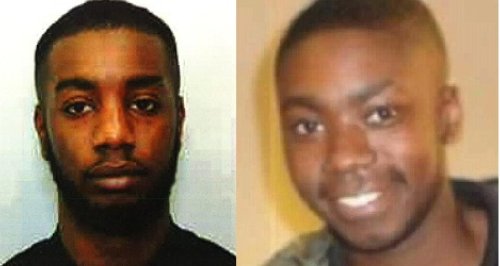 A double murder investigation's underway after two men in their twenties were discovered stabbed to death in a car in east London.

Police were called by paramedics to Montague Road, Leytonstone, just before 1am on Saturday 1 March 2014. Both men were pronounced dead at the scene.

The murder victims are Aaron Carriere, 21, (pictured, left) and Josiah Manful, 20, (pictured, right) who were both from east London, Scotland Yard said.

No arrests have been made and an incident room has opened in Barking under Detective Chief Inspector Neil Attewell from the Homicide and Major Crime Command.

A steady stream of mourners came to pay their respects and lay flowers at the police line.

In tributes to the pair, local mourners identified the victims as "Josiah and Aaron".

A group of three men splashed the floral tributes with brandy before stopping to swap stories about the deceased.

In a written tribute another mourner said: "Nothing but love my brothers, may you rest in peace. Love Tony."

One resident said: "I left and when I came back I saw it. It's horrible and I just heard what happened. I am so sorry - it's terrible."