Take That To Reunite For Band's 25th Birthday! 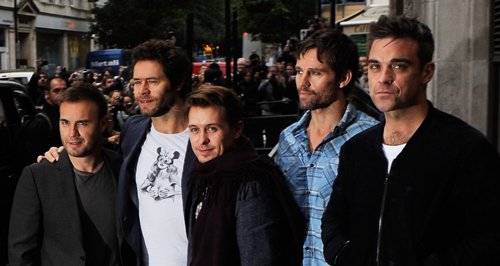 The five boys will rule the world once more as Robbie Williams and Jason Orange are set to rejoin Gary Barlow, Mark Owen and Howard Donald for the band's 25th anniversary.

Take That fans can breathe a sigh of relief as it looks like the five band-members are coming together once more for a rumoured reunion tour to mark their 25th anniversary.

Robbie Williams and Jason Orange are set to rejoin Gary Barlow, Mark Owen and Howard Donald for the band's big birthday in 2017 for one big musical bash.

‘We want to do something with the five of us. That will be great,' said Howard.

‘It would be nice to put all the music from the Nineties and now on one compilation and do a tour that would have to be bigger,’ added Gary. ‘Take That is five people. Exactly when they come back is up to them. That will keep it interesting.’

The hunky frontman joked that the band's fans are going to have to get used to their ever-changing line-up.

‘Moving forward, I do think our fans need to get used to the fact that it's going to change -- maybe every album! I might be missing on the next one and Rob might come in instead of me. Actually, he'd better not do!’

Gary, you better not be going anywhere! We want you ALL back for good…