A Malaysian fishmonger's been charged with murdering two Newcastle University students in Borneo.

The bodies of Neil Dalton and Aidan Brunger, both 22, were found early August 6th lying in the road in Kuching, capital of Sarawak state on Borneo island.

The medical students were on a work placement at a hospital in the town.

Five Malaysian men were arrested in connection with the deaths, which are alleged to have happened after an alcohol-fuelled argument.

One of the suspects, 23 year old Zulkipli Abdullah, is charged with their murder.

Sarawak deputy police chief Chai Khin Chung told AFP the four other suspects would not be charged but would appear as prosecution witnesses.

The charge carries the mandatory death penalty by hanging upon conviction. No plea was recorded.

He added three of them saw the crime, while the fourth helped dispose of evidence.

Court officials declined to comment when contacted, while lawyers could not immediately be reached.

Post mortem examinations on two Newcastle University students, who were murdered in Borneo, will be carried out later.

The Director of Sarawak State Health Department, Datu Dr Zulkifli Bin Jantan, has told Heart that the other students at the hospital where Neil Dalton and Aidan Brunger were on a work placement, will be supported with counselling.

The full statement says,
"We are deeply saddened by the news of the tragedy involving two elective medical students from UK. We would like to express our heartfelt condolence to the families of the two victims.

Both of them had just completed their elective posting in Sarawak General Hospital Kuching. Their attachment period was from 17 June, 2014 until 25 July, 2014.

Post-mortem for the two victims is expected to be done today once we have obtained the clearance from the police.

Currently we have 22 foreign medical students doing elective posting in Sarawak General Hospital. Most of them are from UK.

Meanwhile, a cafe owner who tried to help the two Newcastle University students stabbed to death while on a medical placement in Borneo described the scene of their killings as one he will "never forget''.

Local police said four men arrested in relation to the murders of Neil Dalton and Aidan Brunger in the early hours of Wednesday morning had admitted the crime.

The owner of a bistro in the Jalan Padungan area of Kuching in Sarawak province, in the west of the Malaysian part of Borneo where the attack happened, said he saw one of the alleged killers calmly walk away after the incident, the Mirror reported.

Avinash Ran told the newspaper:
"He looked right into my eyes when he saw me and slowly walked around the side of the car and got inside the passenger seat.

He was trying to act all cool in front of his friends, but his eyes were wide like two moons. I don't know if he was on drugs, but he wasn't acting normally.

Mr Ran said he and another waiter tried to help Mr Dalton and Mr Brunger, both aged 22, but they died before an ambulance arrived 30 minutes later.

Deputy police commissioner Chai Khin Chung said yesterday that police had completed their inquiry, as the men had confessed, and they would now be passing on their evidence for prosecution.

Four men have admitted murdering two medical students from Newcastle University who were stabbed in Borneo after a row in a bar.

The local men have been detained over the killing of Newcastle University Medical School students Neil Dalton and Aidan Brunger, who were on the Malaysian part of the island on attachment to a hospital in Kuching.

The attack happened in the Jalan Padungan area of Kuching in Sarawak province, in the west of the Malaysian part of Borneo.

Deputy police commissioner Chai Khin Chung said they had now finished their investigation, as the men confessed, and they would now be passing on their evidence for prosecution.
"We have finished our investigation, the crime has been solved.

The suspects have been apprehended and they have admitted the crime. We have recovered the weapons from the crime.

We are waiting for the corpses in the hospital mortuary to have the post-mortem carried out. We have all the major evidence in our hands which we will send to the prosecution.''

He went on to describe how the two students had got into an argument with the men on the table next to them in the bar and after leaving on foot, they were followed by car and then attacked from behind.

"They were having a drink and got into an argument with the next table. After a prolonged argument they left the bar on foot and were followed in a car. They came from behind and stabbed them.

The four people, who are local men, will be charged with murder. It's very unusual for Kuching, it's always very peaceful.

It's very unfortunate and we were very surprised this kind of thing happened in our city.''

It has been reported that two Irish medical students were assaulted just days before the stabbings.

The hospital where Mr Dalton and Mr Brunger had been working before being stabbed to death in Borneo is providing counselling to other students since the tragedy.

Sawatar Hospital medical director Dr Chin Zin Hing said the deaths of the two men, who finished their elective with the hospital at the end of last month, was "very sad''.

He said:
"We are trying to provide counselling for the students here. We currently have about 20 British elective students.''

He said the hospital is also working closely with the British Embassy to "see how best we can provide some assistance to the families of the men''.

Newcastle University said they had sent two members of staff out to Kuching to offer support to the students still out there and to help the authorities.

Professor Calvert said:
"We have been in touch with the students who are still in Kuching, in constant touch really, overnight there have been emails going back and forward to try and offer what support we could until our staff could get there.

We now have two members of staff who have arrived in Kuching, they have met up with the students and are trying to smooth the way with the authorities to make things as easy as possible so they can do what has to be done and then get back home again.

Of course they're very, very upset, medical students are a close community anyway and they were out there with friends and colleagues from their course and it's such a tragic thing to have happened.

They're very upset but we're confident the people we have out there are offering them every support and just hope we can get them back soon.''

Two students from Newcastle University are reported to have been stabbed to death in Borneo, Malaysia

The Foreign Office (FCO) confirmed that it was aware of the deaths of two British nationals in Malaysia.

They are understood to be students from Newcastle University, with local reports in Borneo saying they are aged 22 and 23 and died after being attacked by a group of local men.

An FCO spokesman said:
"We are providing consular assistance to their families at this difficult time.'

The Borneo Post reported that the Britons were medical students attached to a hospital on the island.

It's claimed they were attacked by a group of four men as they made their way back to a backpacker lodge from a bar in the early hours of the morning.

It reported four people have been arrested. 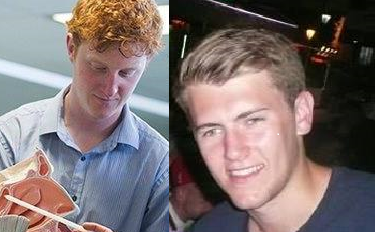 In a statement, Newcastle University's Professor Tony Stevenson, Acting Vice Chancellor, said:
"We were informed this morning of the very sad news that two of our fourth year medical students working at a hospital in Kuching, Borneo, have been tragically killed.

Neil Dalton and Aidan Brunger, both 22, were on a six week work placement along with five other medical students to put the skills they had learnt during their time here at the University into practice.

This has come as a huge shock to us all and our thoughts are with their families and friends at this very difficult time.

Two of our members of staff are flying out to Kuching as soon as possible and we are working closely with the British High Commissioner to support the other students and to co-ordinate their return to the UK."