Thousands of NHS staff across the North East have staged a 4 hour walkout over their pay.

Ambulance drivers, paramedics and nurses all walked out for four hours this morning, between 7am and 11am.

It's part of their ongoing row with the government over a 1% pay rise.

For the first time ever, Midwives also joined the strike action.

Most passing cars, buses and lorries tooted in support and patients arriving for appointments said they backed the action.

They said they never imagined having to go on strike but were at their wits' end.

Nina Steel's a midwife at Newcastle's Royal Victoria Infirmary and was on the picket line outside the hospital this morning.

She said:
"We always put women and babies at the forefront of our care and that's why a number of midwives are still covering emergencies today.

But it's good to see so many so many midwives saying 'No, enough is enough'. 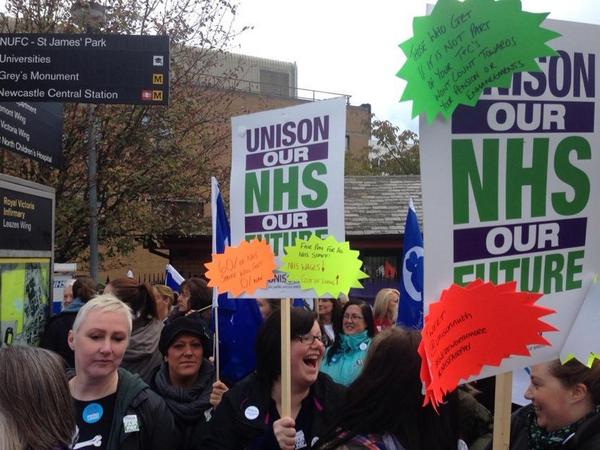 But the government says it can't afford to give NHS workers a pay rise without putting jobs at risk.

I recognise frontline staff do a magnificent job in the NHS. We have had more than 650 NHS volunteers who are willing to put themselves in harm's way to help tackle the Ebola crisis in West Africa.

We're offering them all a 1% rise. The majority of NHS staff get an automatic 3% increment but we can't afford to give a one per cent rise to people already getting that.

The most important thing here is doing the right thing for patients. It would be irresponsible for any health secretary to accept a pay package that means the NHS has to lay off nurses.''