Two school buses, carrying around 50 children, have crashed close to the Oxhill Youth Centre in Stanley.

A 12-year-old boy has been flown to hospital after suffering severe facial injuries when two school buses collided in Stanley.

Police said 50 children and two adults were on board the buses when the crash happened in.

The Great North Air Ambulance Service was called to the scene, where one driver was trapped.

A spokesman said:
"The doctor-led trauma team triaged the injured persons and a 12-year-old child was flown to the Royal Victoria Infirmary (in Newcastle) with serious facial injuries.''

Durham Police said the crash happened at 8.20am on A693 on the junction with Shield Row Lane close to the Oxhill Youth Centre in Stanley.

There have been no fatalities but some injuries, a spokeswoman said.

The pupils are from St Bede's at Lanchester and Tanfield School Comprehensive and are aged between 11 and 18.

Police said two children have been taken to the RVI with injuries with others being treated for shock at the scene.

The children have been taken to the nearby Oxhill public house where they have been met by teachers from their respective schools.

Parents have been informed.

Maureen Davison saw what happened and spoke to Heart Superintendent Colin Williamson said:
"We are currently working closely with other agencies to respond to this incident.

The safety of those injured in the collision is our primary concern along with supporting their families.

There will be some disruption on the roads in this area for some time and I would ask the local community to be patient while we deal with this incident.'' 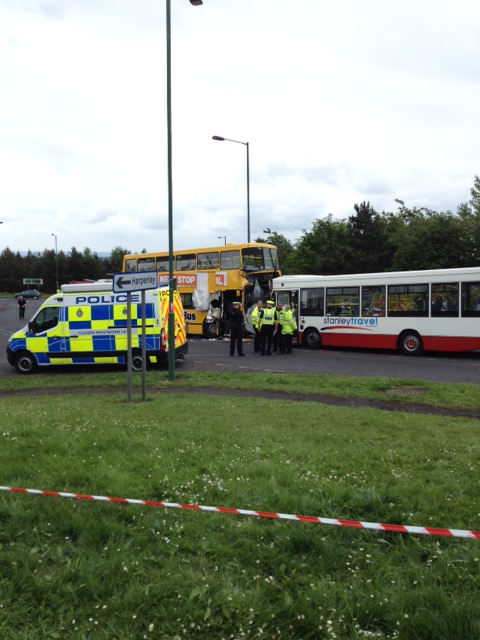