A council's bid to evict anti-fracking protesters from land in West Sussex has hit the buffers.

West Sussex County Council went to London's High Court to ask for a possession order relating to the verges along London Road, Balcombe, where activists have been camped for more than seven weeks to protest against energy firm Cuadrilla's test drilling site.

But today Mrs Justice Lang adjourned the application after describing it as "flawed'', with the result that if the council does not apply to restore it in a new form by October 8, it will be either withdrawn or dismissed.

There were cheers in court by a group of campaigners - some of whom had instructed lawyers to contest the action, which the council said were necessary to avoid disruption of the highway.

The judge said that, although the case was presented as a straightforward matter of obtaining possession, it was more complicated as there was a need to balance the right to peaceful assembly and to demonstrate.

She had heard from counsel that the proceedings might well be academic as the planning permission granted to Cuadrilla three years ago will expire on September 28 and there was currently no application to extend it.

The company would not be permitted to drill after that date and it was likely that many campaigners would leave the site.

The question of who will pay the legal costs of the hearing was put off to a later date.

One of the leading campaigners behind the anti-fracking campaign in Balcombe, Vanessa Vine, said she was delighted to see "sanity and justice'' prevail.

She said: "When will West Sussex County Council take action to evict those who are genuinely posing a threat to the local community - those within the gates of the drill site who are putting us at grave risk, for short-term ecocidal corporate gain?''

Juliette Harris, a Balcombe villager for more than 30 years, said: "Eighty-five per cent of people don't want Cuadrilla in Balcombe.

"The majority of the villagers have been supportive of the protesters, and they have been down there in their hundreds.

"We are thrilled that the judge thought that West Sussex County Council's application to evict was flawed. The council has done nothing to assist us and everything to help Cuadrilla.

"It's time the council paid attention because it is us who pay their wages.''

“We very much regret the adjournment of the case, but accept the court’s decision.

“The County Council reiterates that the reason for taking this action was to maintain road safety on a busy rural road, unlit at night with a 60 mph limit. The roadside encampment is very close to the edge of the grass verges, and there have been numerous encroachments into the public highway. In our opinion it is not safe. We also have a duty to keep the highway open for all traffic.

“The County Council now respectfully requests that the protestors behave responsibly and do not cause a safety hazard on the road or disrupt the highway.

“The court has been given assurances on behalf of the protestors that their action will cease on the expiry of the planning permission on 28 September. We expect those assurances to be fulfilled.

“Today’s ruling by the Judge does not exclude the Council returning to court before October 8 if safety issues on the B2036 escalate.

“There have been some reports that costs were awarded against the County Council. This is not the case. The Judge ruled that the issue of costs should be reserved which means that a decision has been postponed to a future hearing.”

The No Fracking In Balcombe Society Issued This Statement:

A tense assembly of Balcombe villagers, anti-fracking campaigners and many protestors from the site filled Court 37 this morning - standing room only and permission from the judge to sit on the floor.

‘Justice Prevails!’ said Graham Mackie, who lives just beyond the village. ‘Thanks to all the wonderful people who made it happen. And the pro bono legal team who supported them. ‘

No FiBS member Douglas Wragg added: ‘This is very good news. This should send a message to the County about the sloppy way they’ve behaved throughout – over permissions and regulations, as well as over this eviction attempt.’

Cuadrilla are bound by the terms of their Planning permission to cap the well and leave the site by September 28th. The protest camp will remain, with the blessings and support of the majority of the Balcombe community, for as long as Cuadrilla occupy the site.

The Camp was rejoicing early afternoon: ‘ We are so happy that we can now stay to finish our protest, and then leave in a peaceful way once Cuadrilla have left,’ said a spokesperson. ‘This will give us time to clear and clean up. And to rethink and regroup, for future action against oil and gas drilling - in Balcombe and elsewhere in the country where new drilling sites are in the offing.'

This is the original 'notice to quit' the site given out last week. 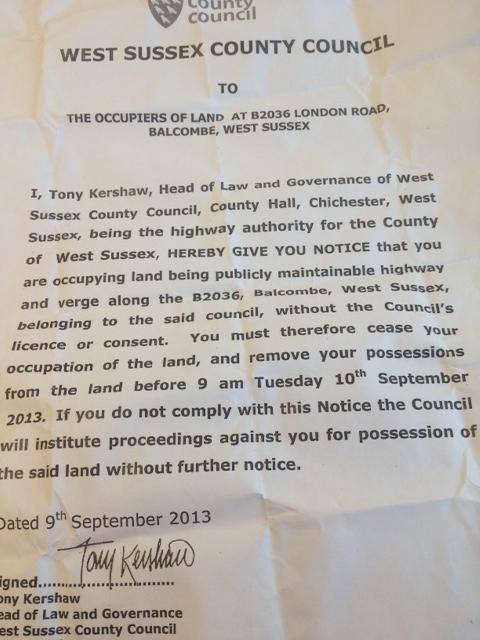