Brighton: i360 Loan Gets Go Ahead

Building of a planned 170m viewing tower in Brighton will start in the summer after councillors agreed to take out a government loan for the scheme - and pass it onto developers.

Brighton & Hove City Council is proposing to borrow £36.2m from the government to enable the Brighton i360 to commence construction and spur the wider renewal and regeneration of the city's seafront.

It will be built by the team who created the hugely successful London Eye, the most visited paid-for attraction in the UK.

The loan would not come from council funds or from council tax but from the  Public Works Loans Board (PWLB) - a government funding agency who make loans available to major building projects.  It is one of the main ways councils can kick start big schemes which generate sufficient income to cover borrowing costs.  For this reason it cannot be used for day-to-day council services such as schools, roads or refuse collection.

In 2012 the council agreed to provide a loan of £14.8m using PWLB funds, with the remainder provided by Marks Barfield (£6m), the Coast To Capital local enterprise partnership (£3m) and a private investor (£15m).

However the private investor pulled out and the economic downturn has meant a replacement has not yet been found. 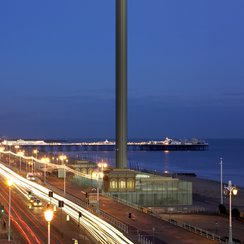 An increased PWLB loan would mean the project could start in June this year and will therefore bring a multi-million pound boost to the city?s economy. It would earn the council over £21m in interest payments and fees which could be ploughed into crucial infrastructure such as repairing seafront arches, structures, sea defences and retaining walls.

Under the new plan, the council would borrow and lend to the project £36.2m for a scheme now estimated to cost £46.2m.  The rest would come from Marks Barfield (£6m) and the Coast to Capital local enterprise partnership (£4m).

- The i360 is projected to earn three times more than it needs to cover its loan repayments.

- If works start in May the attraction could open in June 2016.

- It would provide a catalyst for regenerating the seafront, draw crowds into places like Preston Street, and generate rents from seafront properties and increase parking revenues and business rates ? a further direct income to the city council of an estimated £0.9m.

- It would create somewhere between 170-400 spin-off jobs and bring higher spenders to the city in the form of an estimated 50,000 overnight visitors every year to support local hotels and restaurants.

- External auditors say the loan can be repaid even if the attraction only gets half of its projected visitors.

Council leader Jason Kitcat said:  "This is a crucial project for revitalising our tourism industry and our seafront for years into the future.  It will very clearly signal that our city is open for business - both to visitors and investors.

"This deal will bring in over £1m a year additional income to the council whilst also regeneration the local area and supporting our tourism economy.

"It will provide an extraordinary and spectacular new centrepiece to our seafront.  As well as providing a great view out, it changes the way the world views us - distinguishing Brighton & Hove from competitors and signalling that the city is really buzzing."