Groups of people causing trouble are to be banned from the seafront in Eastbourne.

From midnight on Sunday 21 July anyone committing antisocial behaviour there or in an area in the heart of the town will be ordered to leave and told not to return for 24 hours.

If they refuse, or return within that period, they can be arrested.

Police and PCSOs will enforce the restriction as part of a crackdown on antisocial behaviour.

Residents have complained to police about vandalism, drunkenness, assaults and public disorder in the area.

Under the powers, if officers find a group of at least two people in the area who they believe are going to cause people to be intimidated, harassed, alarmed or distressed they can tell them to disperse, order anyone who does not live there to leave or ban them from there for 24 hours.

The powers are available under section 30 of the Antisocial Behaviour Act 2003.

Gildredge Park is also covered by the powers.

Maps explaining exactly which area is covered by the dispersal area are being put up on lamp posts around the town centre. The order lasts until 27 October.

Sergeant Julian Williams, who leads the Eastbourne town centre neighbourhood policing team, said: "Over the past few months we have received numerous complaints about drunken and disorderly groups of street drinkers within the town centre.

"We have responded to this already by directing our patrols to target known problem persons, challenging their behaviour and seizing all the alcohol in their possession.

"The dispersal order means we can deal with known offenders before their behaviour becomes intolerable.

"Our enforcement work also compliments our extensive work in assisting vulnerable homeless people to receive the services that the council and charity agencies have to offer.

"The dispersal order is not intended to just target disorderly street drinkers. It will enable us to deal with any problem group of all ages.

"Nobody needs to fear the way that we will enforce the dispersal order. We will be fair and proportionate in its application and officers will be able to use their discretion. Only those persons intent on being disorderly within the town will be subject to the powers available."

Here is a map of the area, the sections in pink are the dispersal zones. 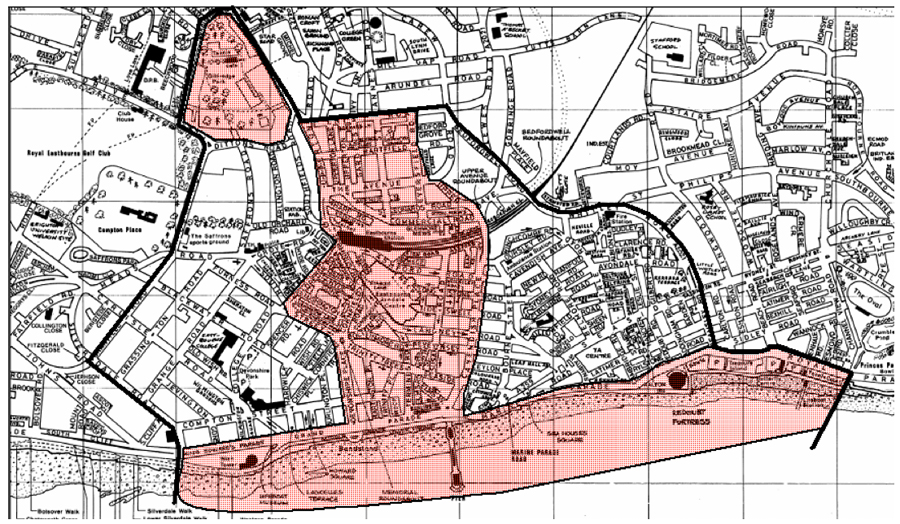