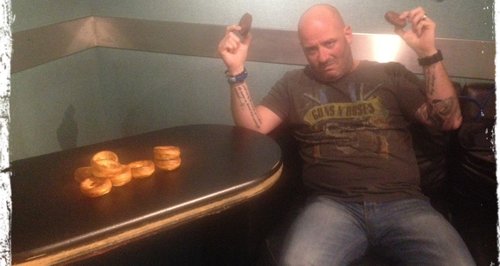 This morning on Heart Breakfast Nicola had an apology to make to the residents of Sussex and Surrey. For those who would've driven down Station Road in Portslade yesterday afternoon may have spotted a bit of traffic heading up towards the Old Shoreham road. Yeh, this was caused by Nicola. Her car broke down yesterday and blocked off a lane for a couple of hours. Nightmare. Not just that, she was later hit by an elderly gent on a motorised scooter! What a day ey?!

Also this morning Tom, Nicola and Jack were playing 'LET'S THROW BLACK PUDDING AT YORKSHIRE PUDDINGS!'. they thought they'd give it a go after the Black pudding throwing championships took place recently. Here's how they got on...

Tomorrow on Heart breakfast you not only have the chance to win VIP tickets to the SD2 festival you could ALSO MEET THE WANTED! AMAZING!! Make sure you tune in from 7.