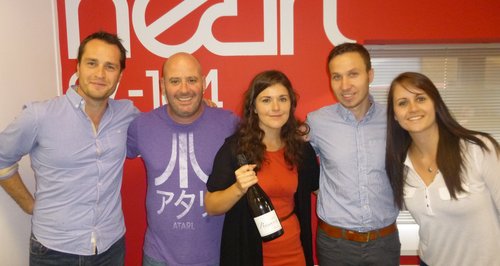 Wow, what a morning!!

Today Tom, Nicola and Jack gave away a gorgeous winter wedding!!! But who did it go to?

We started with 5 couples.....and after a series of challenges, we narrowed it down to 2.

Their final challenge was to have a celebrity come on the show at 8am this morning, either in the studio or on the phone.

Both couples arrived at the studios this morning looking a mixture between, what can only be described as , nervous, excited, stressed and emotional.

Tom, Nic and Jack had no idea which celeb they had managed to get on the phones.

- Couple number 1 (Hayley and Justin from Uckfield) approached the microphone to have a little chat with Jack. Then the next voice we heard on the phone was the Australian hunk PETER ANDRE!!!!! FAN-BLOOMIN-TASTIC!!!

- Couple number 2 (Claire and Vince from Brighton) approached the microphone. After their chat with Jack and a few emotional tears, the voice we heard on the phone was.......MR RONNIE CORBETT!!!! BLIMEY!!

So then it all came down to you, our listener. The voting lines opened for 5 minutes only.......

After hundreds and hundreds of votes, the results couldn't have been an closer! Listen to this!!!....

One Lucky Couple Wins A Wedding

Make sure you tune into Heart Breakfast on Monday as you've got a chance to win tickets to see Tom and Jack in their panto 'Jack and the Beanstalk', not just that, you'll get a stay in a hotel and a chance to meet the cast! Nice.