The Duchess of Cambridge looked opted for a black and white checked Zara dress for an outing in London.

Kate Middleton, 39, was out and about in London on Tuesday, visiting the University College of London’s Centre for Longitudinal Studies.

The Duchess of Cambridge met with researchers to learn about a new study tracking the holistic development of children.

For the visit, the wife of Prince William opted for a chic autumnal look, teaming a checked dress with matching stilettos by Hugo Boss.

The dress is a Zara number worn previously by the mother to Prince George, Princess Charlotte and Prince Louis back in January 2020.

The name of the check on Kate's dress is very similar to The Prince of Wales check, and is a print her late mother-in-law was very fond of.

In fact, it looks like this most recent ensemble from the Duchess is another recreated look inspired by Princess Diana.

If you take a look at this picture of Diana at Paddington Station, London, from 1988, you can see the check is almost identical to Kate's dress:

And while this 1981 ascot look doesn't have a check print, the shape and style of the belt is very similar to the structure of the Duchess of Cambridge's:

Diana also wore The Prince of Wales check back in 1992 while visiting a hospital in Hungary:

Of course, this isn't the first time Kate has worn the classic check print, with the Duchess incorporating it into many looks over the years.

In 2018, Kate wore the print to open The V&A Photography Centre:

And in 2017, she wore The Prince of Wales check on a coat for the Children's Global Media Summit at the Manchester Central Convention Complex:

The Prince of Wales check has also been called Glen Check, Glen Plaid, Glen Urquhart Plaid and more since it was first registered in 1840.

It was originally called the Glenurquhart Estate Check at this time, according to The Scottish Register of Tartan records.

It gained the name Prince of Wales check when King Edward VII – who was the Prince of Wales at the time – visited Countess Caroline of Seafield's estate and saw the staff wearing the check.

He took to the print immediately, and wore it so much that it soon became known as the Prince of Wales check instead of the original Glenurquhart Estate Check. 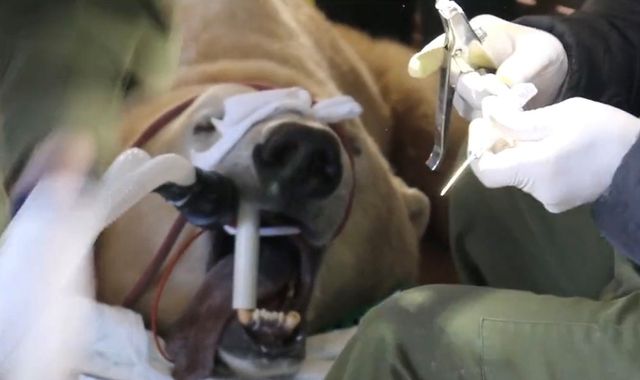