The Duchess of Sussex made a surprise appearance during one of Prince Harry’s royal engagements in Malawi this weekend.

Meghan Markle and Prince Harry have been busy over the past week as they embarked on their Royal Tour of South Africa.

For the second leg of the tour, the Duke of Sussex travelled to Malawi, while the Duchess of Sussex stayed behind in South Africa with their son, Archie.

READ MORE: Meghan and Harry step out with baby Archie for the first time on Royal Tour, and the pictures are so sweet

While Meghan Markle, 38, couldn’t be in Malawi with Harry for some of his visits, the Duchess made a surprise appearance via Skype as the Duke visited Nalikule College of Education.

The Duke met with the CAMA, a network supporting young women in the Malawi area, who boast an impressive 140,000 members and 17,500 in Malawi alone.

During the visit, Harry turned to the women and said: "I know there's somebody else you'd far rather hear from than me, hopefully if technology doesn't fail us you may see somebody on the screen.”

With that, Meghan appeared on the screen, and the CAMA choir began singing for her.

The Duchess beamed as she told the group: "I’m so happy to be with you.”

She continued to tell them: "We're just so proud as president and vice-president of the Queen's Commonwealth Trust that we can support you in everything that you do because we cannot begin to express how valuable and vital that work is, we're just incredibly proud to be part of it.

"I wish I could be with you, we're in South Africa right now Archie's taking a nap. I'm with you in spirit."

Following the surprise, the footage was posted on the couple’s official Instagram page, Sussex Royal.

The pair captioned the video, writing: “Hello Malawi, it’s South Africa calling! Another incredible day on #RoyalVisitAfrica as The Duke arrived in Malawi, with The Duchess joining him via Skype to speak to women and girls who went to school with the support of CAMA and @camfed.

“Afterwards, The Duke was able to meet President Peter Mutharika and thank him for the wonderful welcome in his country.

“Today, The Duchess of Sussex linked up with Nalikule College, Lilongwe, to join The Duke and an amazing group of women who attended school through the help @camfed and its 20-year-old alumni network CAMA.

“These CAMA women are part of a major network across Africa, which has 140,000 members and 17,500 in Malawi alone. These positive female role models, leaders and entrepreneurs, are working to lift their communities out of poverty. Money distributed by CAMA goes directly to each of their alumni, who then use their own resources to support another three children to attend school.

“Along with support from the @Queens_Commonwealth_Trust, CAMA and @camfed are changing the lives of many young girls though education and empowerment. As President and Vice President of the QCT, The Duke and Duchess both believe in the power of education to empower young girls, and change society as a whole.”

Meghan and Harry will be reunited on 2nd October when they both arrive in Johannesburg for the final stop on their tour. 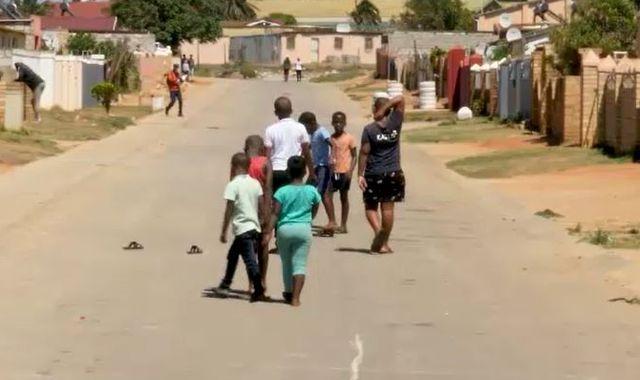