A mum from North Devon wants to highlight their 'poor' treatment at the hands of two of Devon's major hospitals.

Parents Sophia Vanhecke and Ben Taylor from Wrafton in North Devon are sharing their story of baby Hope-Rose.

They feel let down by the emergency care and how Sophia was treated after being admitted to Plymouth's Derriford hospital. They want to raise awareness of neo-natal unit at Derriford who valiantly fought to save their baby after she was born prematurely.

They also believe Hope-Rose may still be alive if she had received the correct emergency care from the time they rang the emergency services late at night for help and advice.

Staff at Barnstaple Accident and Emergency failed to alert the specialist care team saying that Sophia was suffering from an infection and was not in labour.

Hope-Rose weighed just over 1lb when she was born at 25 weeks at Barnstaple Hospital in Devon.

Sophia said it seemed there was a break down in communications as she was taken to Accident and Emergency instead of the labour ward.

"I was in so much pain and they were trying to treat me for an infection.

"That was around 2.30am, when I had been there for an hour-and-a-half.

"Hope-Rose was born half an hour later, fully formed, but Sophia said she had to be resuscitated two or three times before she could be moved up to SCBU."

She said there was a lot of confusion and believes there was a delay in calling the specialist Derriford team, who had to travel up from Plymouth.

Initially called Hope, but changed to Hope-Rose in honour of a nurse who cared for her, the baby was stable for 24 hours but her condition deteriorated.

She had suffered brain damage and multiple bleeds and the family were advised if they wanted to christen her it would have to be quickly, so close family were called to the hospital for the ceremony.

Sophia does not want to sue the NHS or get anyone sacked, but she does want answers.

Words cannot describe how wonderful the neonatal team at Derrifod have been and what they have done for the family. 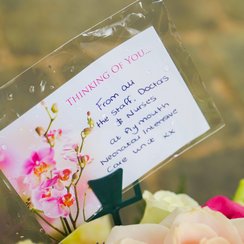 It was there that a consultant told them Hope-Rose would have had a 65 per cent chance of survival if the right equipment and specialist trained staff were available from the beginning.

But she does feel let down by the initial emergency care and also her care when admitted to hospital.

This included towels covered in blood being left in the corner of the room for a couple of days and the way Sophia felt about her after care, including not being allowed to grieve. 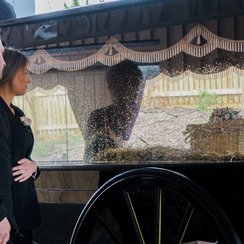 Professor Adrian Harris, medical director at Northern Devon Healthcare NHS Trust, said: "We would like to offer our sincere condolences to Sophia and Ben for the tragic loss of Hope-Rose.

"We are dedicated to providing safe, high-quality care to our patients with compassion, and as with any incident of this nature we will be conducting a full investigation to establish what happened and identify any learning that we need to act on.

"We will work with the family during the investigation and will share our full report with them."

"We were quite saddened by some of the information and to hear that Sophia's experience with us wasn't a good one.

"I have spoken to our head of maternity who tells me that when this is raised as a formal complaint, the maternity team will meet with Sophia and approach this on a personal level with sensitivity and compassion."