A severely wounded seal's been rescued after being found with a plastic frisbee stuck around its neck on Horsey Beach.

Nicknamed Sir David, after Sir David Attenborough, he's the third seal to be found in this state off the Norfolk coast in less than two years.
Alison Charles, manager of the RSPCA centre at East Winch where Sir David is recovering, said: "He's in a right state, he's really quite poorly.
"He should be a lot bigger than he is. He's not emaciated but he should be a lot bigger and heavier because he's a big old boy.
"It's obviously been on for some time cutting into his neck, it's caused a huge, deep, extensive wound that's really infected."
The frisbee was cut off by a vet using surgical scissors and Sir David has been given antibiotics and painkillers.
"We didn't see any of these type of injuries (from plastic pollution) until 2008 and we've been here since 1988," said Ms Charles.
There has been a "gradual increase" since the first case which involved a nylon fishing line, she added.
Initially it was three or four cases per year until last year when there were eight at the centre. There have been four this year to date. 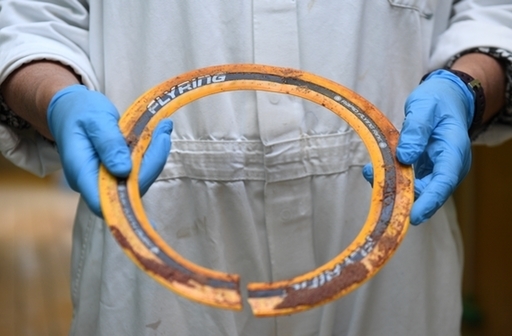 "We don't know quite why there's so much plastic out there and we don't know why we're seeing so many but we're certainly seeing it," added Ms Charles.
"All they do is they're inquisitive animals, they're swimming around in the sea, they see this plastic in the sea and unfortunately they put their heads in, and once their neck's in their anatomy doesn't allow them to take it off their head, so it's stuck, so as they're getting larger the frisbee's getting tighter and tighter and basically garroting them.
"It's awful what we're seeing and we are seeing an increase in it.
"We hope that people will think about what they're doing and not take this frisbee to the beach to play with their dog."
The RSPCA said the number of seals reported to be caught up in plastic litter rose nationally from five in 2015 to 28 last year.

Afghanistan: Taliban's crackdown against women exposed - but some are rebelling