A retired police inspector from Warwickshire's returned home after rowing three thousand miles across the Atlantic, for a children's charity set up by his neighbours.

They broke the world record by crossing the finish line in eighth place, rowing between the Canary Islands and Antigua.

Stephen raised more than £4,000 for Molly Olly's Wishes, a charity launched by Rachel and Tim Ollerenshaw.

They lost their daughter Molly, who was 8 years old, to a rare kidney cancer in 2011.

Stephen and his team took turns on continuous two hour shifts to complete the journey. He and his team were one of 28 boats and 88 rowers.

#LISTEN A retired inspector from #Warwickshire has raised £4,000 for local children's charity @MollyOllys by rowing 3 THOUSAND miles across the Atlantic. He tells us the challenges he and his team faced (Image: Ben Duffy) #HeartNews pic.twitter.com/VI43iJ3Fi5

Stephen, who retired from Warwickshire Police four years ago, was welcomed over the finish line into Antigua by his son Adam and 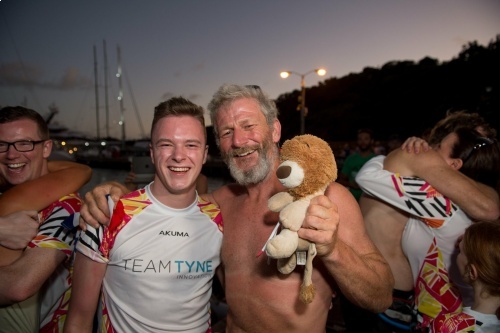 He described that moment: "We experienced a level of euphoria that was simply off any scale you might imagine. Horns were blasted from

the super yachts moored there, hand flares lit up the early evening sky and we saw our friends and family for the first time. Being showered

in champagne and given such an enthusiastic welcome was so much to absorb at the time and even now feels surreal."

But after the euphoria had died down, what was he most looking forward to?

"I was craving cold water. We had been drinking luke warm water for six weeks - and then a cold beer and a shower!"