The funding is part of a £1.8 billion investment across the NHS in England announced today by the Government.

The £99.9 million funding for the Truro site is the biggest ever single investment Cornwall has seen in local health services.

The maternity unit building is 51-years old and recently in a report the Care Quality Commission they claimed due to structural defects, has a limited life-span.

Former Prime Minister David Cameron visited there when he and his family were holidaying in the county in August 2010.

Mrs Cameron had a short stay at the Royal Cornwall Hospital in Truro after giving birth to daughter Florence Rose Endellion by caesarean section.

Chief executive Kate Shields said: “This is fantastic news for Cornwall. It means we will be able to build facilities to give the next generation the best start in life and bring together services so that our clinical teams can provide brilliant care.

“We can’t wait to get started!”

It is more than 20 years since there has been any major investment in children’s facilities at the hospital and their co-location with maternity and neonatal services will allow the hospital teams to work more effectively, to provide safer care and to meet national guidelines.

Every year on average 4,000 babies are born at the Princess Alexandra wing.

The new building will also become the new main entrance for the hospital with plans for changes to the layout of roads and a pedestrian zone to improve the environment and accessibility.

The next step will be for plans to be further developed and a building programme determined. 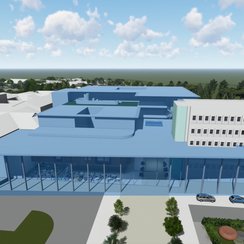