Christian Hickey Jr and his mother, Jayne, were blasted in the legs with a Heckler & Koch P7 self-loading pistol as they answered the door to their house in Winton, Salford, in October 2015.

Both were left seriously injured lying in a pool of blood in the hallway of their home, one bullet passing through Mrs Hickey's leg into her son's, stood behind her.
They were the victims of a major Salford organised crime gang known as the A-Team, involved in drugs, violence and extortion, Manchester Crown Court heard.
The attack was a revenge mission for the "execution" of Salford "Mr Big" Paul Massey three months earlier - also gunned down on his doorstep, with an Uzi machine gun by a splinter faction of the gang.
A jury on Thursday convicted six alleged members of the A-Team for involvement in the shooting of the Hickeys following a two-month trial.
Carne Thomasson, 28, Christopher Hall, 49, and Aldaire Warmington, 32, were each cleared of a count of conspiracy to murder but convicted of conspiracy to commit grievous bodily harm with intent and conspiracy to pervert the course of justice.
John Thomasson, 49, was cleared of both conspiracy to murder, conspiracy to commit grievous bodily harm and perverting the course of justice.
James Coward, 22, Dominic Walton, 26, and Lincoln Warmington, 32, were each convicted of conspiracy to pervert the course of justice by getting rid of the stolen Audi S3 car used in the attack.
Two other men, John Kent, 54, and Jacob Harrison, 26, were convicted of conspiracy to commit grievous bodily harm with intent for involvement in an earlier shooting of a rival by the same gang.
Kent's daughter in the public gallery burst into tears as the jury foreman delivered the verdicts following nine hours and 36 minutes of deliberations.
All nine will be sentenced by trial judge Mr Justice Popplewell at a date yet to be fixed.
Jurors heard the boy and his mother were shot at their home in Winton, Salford, at around 9.25pm on October 12 during a gang war on the city's streets.
Christian Hickey Sr, once jailed for manslaughter, was good friends with Michael Carroll, who the court heard had been part of the A-Team but a deadly feud developed between him and the gang's alleged boss Stephen Britton, splitting the gang into rival camps, leading to a series of gun, grenade and machete attacks.
Carroll had fled abroad to Spain but he was best man at Christian Hickey's wedding and the pair had financial ties, the court heard.
After the murder in July 2015 of Massey, 55, the "mentor" to Stephen Britton, the A-Team took revenge.
Carne Thomasson, a drug dealer earning £5,000 a week, knocked on their door to "flush out" Christian Hickey Sr, the intended target, the court heard.
The Hickeys were expecting the return of their daughter from a swimming lesson but Mrs Hickey answered the door to find Thomasson asking, "Is your husband in?".
She replied, "One sec" and went to close the door but a second man then appeared from behind her husband's van and opened fire.
Blood was left "pouring" out of her son's leg as she screamed for her husband, who locked the door and dialled 999.
In a recording of the call Chris Hickey is heard to say: "My son has been shot, he is only seven years old. Please send someone quickly.
"Hurry up my wife has been shot in both legs.
"There's lots of blood.
"My son is going white now, please hurry up. They are conscious but my wife is losing a lot of blood. Hurry up."
Thomasson and the gunman, who has not been identified, fled in a stolen Audi S3 car with false plates.
Detectives at Greater Manchester Police's (GMP) major incident team pieced together phone, vehicle movements and CCTV footage, showing Carne picking up the gun from the gang's armourer, Christopher Hall.
Aldaire Warmington had a "high level managerial role" in the A-Team, "pulling the strings" from afar and helping to arrange disposal of the car, jurors were told.
It was driven to Edinburgh the next day by Hall and has never been recovered.
Alleged gang members Lincoln Warmington, Aldaire's twin, Coward and Walton were all convicted of perverting the course of justice by helping to get rid of the car.
Two months later in December 2015 Hall and Aldaire Warmington were arrested in Cheshire with the gun and both were jailed for possession of a firearm.
Both are already currently serving jail sentences.
The same gun had been used in March 2017 to shoot Jamie Rothwell, another member of the rival Carroll gang, at a car wash near Wigan.
Kent, whose daughter has a child with Aldaire Warmington, had driven around to "spot" the victim, before calling in the gunman in a stolen Seat Ibiza driven by Jacob Harrison.
The passenger got out of the car momentarily, leaned across its roof and fired a number of rounds across a busy road, hitting Rothwell in the abdomen and arm, but not killing him.
Harrison had admitted conspiracy to commit grievous bodily harm and Kent was convicted of the same offence.
Kent was also found guilty of conspiracy to pervert the course of justice through persuading his employer, Mark Lamb, to provide a false alibi.
Lamb is believed to have "gone to ground" in Cyprus.
The gunman in either shooting has not been identified.
Michael Carroll and Stephen Britton have not been charged with any offences and both are believed to be currently out of the country.
Christian Hickey Jr is still undergoing treatment for his injuries.
A court order bans further identifying the family, who have moved from Salford and have been relocated by GMP's protected persons unit.
All eight defendants will be sentenced in April. 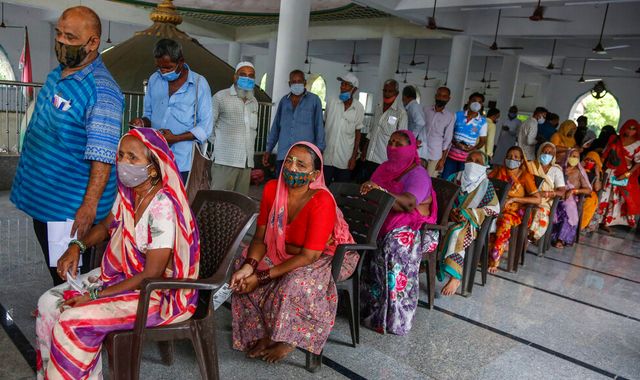 COVID-19: Why India is concerned about 'Delta plus' variant and a third wave - as 41 cases detected in UK

Labour calls on government to intervene in possible Morrisons takeover