Benefits assessment company Capita has withdrawn a legal bid to reverse "reputational damage" it claimed to have suffered after a claimant from the West Midlands died.

Victoria Smith died a few months after her personal independence payments (PIP) were stopped by the Department for Work and Pensions (DWP), the UK's largest trade union Unite said.

Although DWP officials make decisions on the main disability payment, a key part of that process was an assessment carried out by a Capita healthcare assistant.

The 33-year-old suffered with agoraphobia and the condition fibromyalgia, which left her in constant pain.

However, the Capita employee concluded Miss Smith did not score on the needs test despite the existing health conditions.

Her benefits were then stopped by the DWP and in July last year, Ms Smith died after suffering a brain haemorrhage.

However, it was also concluded that her existing conditions including the fibromyalgia had deteriorated as well.

Ms Smith's mother and Unite supporter Susan Kemlo then brought a claim against Capita for maladministration and was awarded £10,410 by the court.

The award was made following a default judgement for Ms Smith's mother, because Capita were absent at the hearing.

Earlier this month it emerged the company had filed papers with Telford County Court to set aside that judgement and re-list the case, with Capita stating it had not had a chance to defend the original claim.

In the paperwork, Capita said it "acknowledges that it has not been able to explain the default and therefore cannot provide a good reason for it".

The company stated its failure to respond to the court at the time had been "entirely innocent and inadvertent".

Capita had also stood by its employee's assessment of Ms Smith, describing it as "fit for purpose, accurate and medically justified" and added that as a result the family's claim was "without merit".

The company set out that if the county court refused to set aside the matter, then the "prejudice to Capita" would be "extremely significant".

The court papers added: "Capita has been on the receiving end of significant negative press which suggests that it has been held liable following a successful claim by the claimant.

However, in a statement on Thursday, Capita said that after considering "this exceptional case" it would no longer contest the original judgment.

Reacting to the decision, Unite's head of community Liane Groves said: "Despite the tragic circumstances of Victoria Smith's case, we hope that Capita and other companies contracted to assess benefit claimants, on behalf of the Government, will now adopt a new and more sympathetic approach to assessing claimants."

She added: "Unfortunately, this case is not an isolated incident.

"Unite Community has an 80% success rate in helping claimants with their PIP appeals.

"All too often the Department of Work and Pensions (DWP) and the private profit-driven companies that carry out work capability assessments choose to ignore expert medical evidence.

"I would like to pay tribute to Susan Kemlo for the courage and tenacity she has shown in pursuing justice in her daughter's case - this is a massive victory.

"We must all now work harder to ensure that what happened to Victoria is never repeated.

"This is the message that Unite is strongly giving to Work and Pensions secretary Amber Rudd, as making a claim for benefits is stressful at the best of times and even worse if you are suffering from life-threatening conditions."

She added that credit was also due to the "painstaking and diligent" work of Unite community branch secretary Duncan Walker, who had gathered 800 pages of evidence in relation to Ms Smith's case.

A Capita spokeswoman said: "We continue to offer our deepest condolences to Victoria's family and, having considered this exceptional case on an individual basis, have decided not to contest the original court judgement." 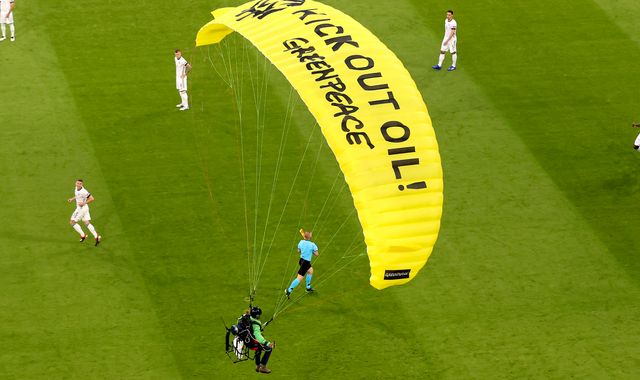 Climate protester parachutes on to pitch at Euro 2020 game