Louise Porton, who murdered her two young daughters after they "got in the way" of her sex life, has been jailed at Birmingham Crown Court for life with a minimum term of 32 years.

Porton had denied killing three-year-old Lexi Draper and 17-month-old Scarlett Vaughan, but was found guilty by a Birmingham Crown Court jury on Thursday after a five-week trial.

Jailing the 23-year-old on Friday, Mrs Justice Yip, describing the murders as "evil" and "calculated", said: "These were blameless young children who were plainly vulnerable and ought to have been able to rely on their mother to protect and nurture them.

"Instead you took their young lives away." 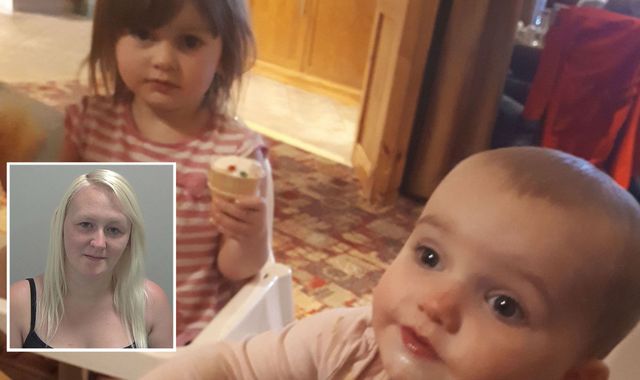 Before sentencing, the judge told the court Porton had "no medical history or mental disorder that goes any way to explaining what happened in this case".

The judge added: "One way or another you squeezed the life out of each of your daughters, only calling the emergency services when you knew they were dead.

"I am sure at the time of the deaths, you intended to kill each of your daughters.

"Why you did so, only you will know."

The judge who sentenced Louise Porton from #Rugby to life for the murder of her 2 children said she made calculated decisions to kill her children. pic.twitter.com/gUwDPQRHZL

Jurors heard Porton accepted 41 friend requests on a dating app just a day after the first child Lexi died and was described by prosecutors as being "calm and emotionless" following Scarlett's death.

While Lexi was ill in hospital, just over a week before she died, Porton took topless photos in the toilets and was arranging to perform sex acts for money with a man she had met through a website.

Porton, of Skiddaw, Rugby, Warwickshire, suffocated Lexi in the early hours of January 15 last year and was then heard "laughing" at a funeral parlour two days before killing Scarlett on February 1.

The children's father, Chris Draper, said in a victim's impact statement read to court by prosecuting barrister Nina Ellin: "I am broken. I will never be the same person.

"I have to take each day, day-by-day and I don't know how I will go on as I feel I have nothing to live for.

"Why did Louise do something so evil to our beautiful daughters? You are their mother, the person supposed to care for them, protect and love them.

"They were just an inconvenience to you; how could you do this?"