After Phil was brutally attacked by Stacey Fowler this week, here's a look back at his death defying moments.

When it comes to EastEnders characters, you’ll be pressed to find anyone more iconic that Phil Mitchell.

But Albert Square’s hardman found himself in hospital last night when Stacey Fowler left him for dead in a shock attack.

The cleaner (Lacey Turner) hit him over the head with a spanner after finding him choking her husband Martin in the Arches.

However, any ‘Enders fan will know that this isn’t the first time Phil (Steve Mcfadden) has cheated death. Here’s a look at his most death defying moments…

Who could forget the scandalous affair Phil had with his brother Grant’s wife Sharon.

The pair did the dirty behind Grant’s back for months, but Sharon refused to leave her husband so they called things off.

But when Sharon then got caught on tape telling friend Michelle Fowler about the affair it was played to the entire Queen Vic.

Grant then attacked Phil and left him with a blood clot on the brain and a ruptured spleen. Luckily, he made a full recovery and used up just one of his nine lives.

In another brotherly bust up, this time around it was Grant’s turn to sleep with Phil’s estranged wife Kathy.

While caught in a furious rage, the pair ended up fleeing from an armed robbery which then caused them to plunge into the River Thames.

Phil ended up in a coma after being rescued from the deep waters, as Grant disappeared for a new life in Brazil!

We love a soap whodunnit, and who better to take on the huge storyline than Phil Mitchell.

It all started when he was gunned down on his own doorstep by a mystery shooter.

With a list of enemies as long as his arm, the likes of Ian Beale, Mark Fowler and Dan Sullivan were all suspects in the long-running storyline.

After spending weeks in hospital, it turned out Phil knew it was his long suffering ex and mother of his daughter Louise, Lisa Shaw the whole time.

Phil ended up in another lake after a camping trip with Ian Beale and their kids ended in disaster.

After their car smashed and overturned, Phil managed to escape before returning to the water to rescue Ben and Peter.

After getting addicted to crack cocaine, Phil’s mum Peggy Mitchell locked him in the pub to stop him taking anymore drugs.

But during a furious argument he later set fire to the pub with himself, Stacey Branning and her daughter Lily inside.

The mother and daughter eventually escaped, but a large wooden beam fell on Phil and he was only hauled out at the last minute by Peggy and cousin Billy.

Ian Beale almost left his long-time enemy for dead when he fell to the ground suffering from a heart attack.

Phil had been threatening to expose Ian's affair with Roxy Mitchell's mum Glenda to his wife Laura.

But as his conscience kicked in, Ian called an ambulance at the last minute.

Things got very dramatic on Phil’s wedding day to Sharon when his former lover Shirley Carter demanded he made a decision between the pair.

When Phil then rejected her, she went on a furious rampage and ended up shooting Phil in the chest before running away.

Low and behold, Phil managed to survive another shooting.

In another shock storyline, Phil was kidnapped by Sharon’s biological father Gavin Sullivan.

After managing to escape, his arrived back on the square covered in blood a few weeks later and collapsed on the floor.

After being rushed to hospital, he was found to have multiple broken bones and had broken his sobriety.

It turns out years of alcohol abuse had taken their toll on Phil, and he was given just 12 months to live after being diagnosed with Cirrhosis.

A year later, Phil was finally given a liver transplant on December 25 - and just like a Christmas miracle, he was soon back to full health. 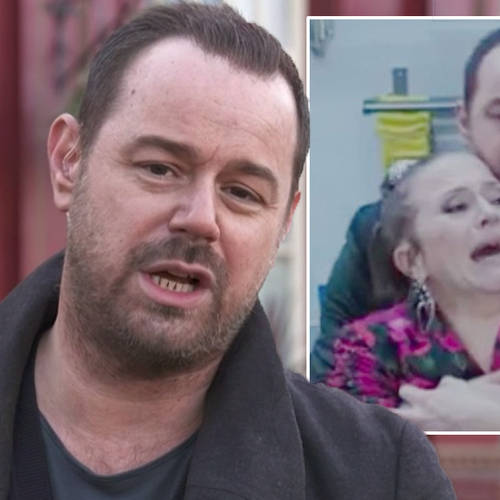