It was on the 7th of December last year when Mr Craciunescu walked into a bank and demanded money. He issued threats to staff members by saying he has a bomb and will detonate it if his demands are not met.

The staff handed him the money and he left the premises, leaving his bag containing the fake bomb on the counter.

The bomb was later found not to be a viable explosive device, but a bunch of tissues wrapped in a black fabric and a TV remote he stole from a hotel room.

CCTV images of Craciunescu were published in a large scale appeal to find him. He handed himself in to British Transport Police officers on 9 January.

Craciunescu said that he spent all the money he stole on adult entertainment venues, hotels and alcohol. 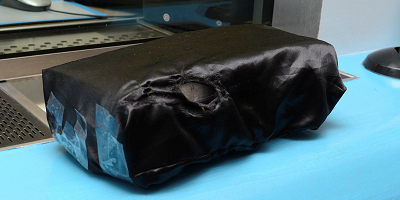 “In an interview Craciunescu has admitted to committing the robbery and using a mock device to threaten bank staff.

He has also said that he knew what he did is wrong and although we are satisfied that he has accepted the responsibility for his actions, this was still an appalling crime.

“The members of staff were genuinely terrified and scared for their life, not knowing that the device left behind at the scene was not viable. This kind of experience leaves long lasting mental scars which will take time to heal.”