The untold tales of the D-Day landings have been compiled in a sound installation to honour the 75th anniversary of the operation.

Voices of Liberation was unveiled by 98-year-old blind veteran Ron Cross at the Portsmouth Naval Memorial on Friday.

Created by The Commonwealth War Graves Commission (CWGC), the work allows the public to listen to previously unheard accounts from the Normandy battlefield on June 6 1944 and recollections from descendants of those who never made it home.

Visitors trigger the recordings when they sit on a bench overlooking the cemetery.

Mr Cross, who was among those to record his story, was the first person to experience the installation.

It is open to the public between June 5 and June 9 on Southsea Common when thousands of people are anticipated to descend on the Hampshire city for commemoration events.

Mr Cross, from Gosport, said: "I'm very proud the Commonwealth War Graves Commission asked me to do this, very proud indeed. The fact that this installation is based on sound means that those, like me, who are blind, can enjoy the experience.

"Sadly we had to fight that war and these chaps gave their life for our safety now."

Serving in the 79th Armoured Division, Mr Cross and his fellow engineers were responsible for landing tanks and clearing minefields set by the Germans before reinforcements arrived.

Since 2012, he has been supported by Blind Veterans UK to help him live with his sight loss.

Fellow blind D-Day veteran 94-year-old Bob Jones from Hayling Island, who served with the Royal Naval Beach Commandos, joined him for the event.

Max Dutton, the CWGC's assistant historian, said: "These archives include veterans speaking candidly about their experiences, as well as the families of loved ones speaking about what commemoration means and why it is so important that we remember.

"It is a really moving installation that we hope will get people to reflect."

This is the first time the CWGC has created audio archives after asking the public to send in their wartime experiences.

The installation will also be at the Bayeux War Cemetery - the CWGC's largest site honouring the fallen of the Second World War in France.

To submit stories to the installation or listen to a podcast about it visit: liberation.cwgc.org 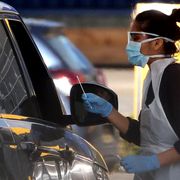 Coronavirus: How did the UK's COVID-19 testing data become such a mess?