A man has been jailed for four years and two months after being found guilty of causing grievous bodily harm following a stabbing in Calne.

Joseph Browne, aged 19, of Braemor Road, in Calne, was jailed for the attack which left his 21-year-old victim in hospital for five months.

He was also handed a 20-month prison sentence, to be served concurrently, for possession of a knife.

Browne assaulted his victim, Cameron Tait, in the car park of Bremhill View Social Club last November, stabbing him in the abdomen with a 15cm hunting-style knife. 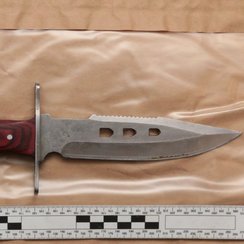 Wiltshire Police were called to the scene at 6.45pm and Browne was quickly identified as the main suspect and arrested within the hour.

Mr Tait was taken to Southmead Hospital with life-threatening injuries and spent five months in hospital. He has been left with permanent injuries and scars that he will never recover from.

"Browne has today been sentenced for this shocking crime.

"Throughout this investigation Browne has failed to take any responsibility for his actions, unnecessarily putting Mr Tait and his family though a full criminal trial.

"He initially lied about carrying the knife to the scene of the attack. He then disposed of the knife and his outer clothing hoping that the police would not find them and link them to him and the crime.

"However, it has been shown that this was a premeditated attack on an unarmed person, who had posed no threat nor shown any physical aggression towards Browne.

"Mr Tait suffered serious injuries as the knife went completely through his stomach, as well as other vital organs. It is only thanks to the early first aid provided by his friends at the scene, and the expertise of the paramedics and hospital staff, that he is alive today."

Det Insp Mawson added: "This attack demonstrates the disastrous and heartbreaking impact of young people carrying knives and using those knives to maim others.

"If Browne had not been carrying a knife that day, these life-changing injuries would not have occurred."

Head of Crime Prevention at Wiltshire Police Sonja Leith said the Force had been working hard to educate young people about the dangers of carrying knives.

She said: "This could very easily have been a murder investigation and we hope it highlights how quickly a confrontation or argument can escalate if one of those involved is carrying a weapon.

"We are continuing with our proactive partnership work, pairing up with other organisations, including the youth offending team and the local authorities, to make sure our young people in Wiltshire and Swindon understand and appreciate the serious impact of knife crime."