Sour sweets, a Chinese takeaway and an orange Fanta... this is a night in watching movies with Mark Wright 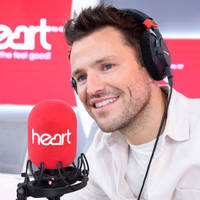 The only thing that changes on a weekly basis for Heart presenter Mark and his wife Michelle Keegan's movie night is what they watch!

Saturday nights are movie nights in the Wright household, and I'd be lying if I said we didn't have them down to a fine art.

Every week there are certain elements that never change - what we eat and when, the drinks, the snacks... the only thing that varies is the movie we are watching!

We always tuck into a Chinese takeaway before we decide what movie we’re going to watch. Our order is always the same - salt and pepper chips, prawns and squid, a quarter shredded duck, two plain chow meins, egg fried rice and a chicken satay.

During the movie itself, we snack on doughnuts, popcorn and sour sweets, the tangier the better

We don't drink alcohol with dinner, or when we watch the movie itself. Every week I always have an orange Fanta - it's the only time I ever drink it, and I think I love it as it reminds me of when we would have a Chinese takeaway when I was a kid. It's purely nostalgic treat.

I had similar feelings of being transported back in time when we sat down to watch Terminator Dark Fate.

Arnold Schwarzenegger is back as the time travelling cyborg assassin, but with movie technology light years ahead of the 1984 original, this sequel brought the story - and the action - right up to date.

It was also great to see Linda Hamilton back as tough talking Sarah Connor, and her chemistry with Arnie was just as strong as when they were last on screen together since 1991's Terminator 2.

Also back in the mix is James Cameron, who directed the first two and produces this latest instalment of the series, which sees Sarah Connor and T-800 team up to protect a girl from a newly modified Terminator - who has been identified as a future threat to Skynet's brutal robot overlords.

Sky Store brings you the latest movies straight from the cinema for your big movie night in. Terminator Dark Fate is available now in Sky Store.