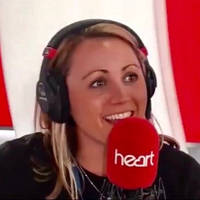 Heart presenter Fia Tarrant shares her favourite things about a cosy night on the sofa watching Maleficent: Mistress Of Evil with her son Harris, 4.

Movie night at my house usually starts with flipping a coin to decide to watch - and sadly for me, it’s never a toss-up between two adorable cartoon epics.

When it comes to films, my son Harris is four going on fourteen. He loves monster movies like Jurassic Park and Godzilla, while I am more of a Disney girl.

That’s why Maleficent: Mistress Of Evil was a perfect pick for us. It had the spooky, tense moments Harris takes in his stride (unlike his mum!) and the Disney fairytale for me.

We have movie night every Sunday. I love how it marks the end of a busy week, and it is the perfect way to relax after presenting my weeknight shows on Heart.

It lets us spend some quality chill-out time together at home before we are back to school and real life, and we both really look forward to it as the week rolls to a close.

While the movie changes every week, there are a few things that always stay the same.

Firstly the snacks. Snacks are so important, and it was thanks to Harris one day deciding he wanted ‘peanut butter popcorn’ that we now have a big bowl to share every week.

I never even knew it existed and was Googling recipes before I found it in the supermarket. It’s one of those things that shouldn’t work but really does!

Another constant, along with stacks of soft pillows and snuggly blankets, is a hot chocolate for Harris, and a glass of wine for me.

In homage to Maleficent, this week I opted for a rich, dark and fruity red - and if that wasn’t gothic and vampy enough I drank it from a Halloween goblet for extra effect.

I’m not sure if it was the wine or the skills of the special effects team, but at one point I questioned whether it was Angelina Jolie in the starring role, she looked so different!

We were both totally absorbed in the follow up to 2014's Maleficent, gripped  by the drama brewing in the Kingdom of Ulstead and the fairy-realm of the enchanted Moors. After generations of suspicion and hate, an unforeseen but joyous occasion means the two worlds could finally unite and live in peace - but unseen forces and fear threaten to cause more pain and havoc than before.

The bit I loved most in the film was the twist at the end - but that’s all I’ll say, I don’t want to spoil it for anyone else…

Ultimately my favourite thing about our movie nights is getting lots of cuddles from my little boy.

As he gets older they are fewer and further between - but I’m sure as he gets bigger and his movie choices get scarier I’ll still be hiding behind him instead of a cushion!

Sky Store brings you the latest movies straight from the cinema for your big movie night in. Maleficent: Mistress Of Evil is available now in Sky Store.