Did they nail it?

The Britain's Got Talent auditions have barely started and Ant and Dec are already up to their mischievous antics again.

The presenting duo have boarded the banter train and this time Amanda Holden is their first passenger.

The BGT host dressed in a satin hot pink dress with gold heels, posed with her leg up in a rather fancy looking shower on Instagram.

Captioning the shot she wrote: 'Can’t help thinking how funny this would be if it suddenly turned on.'

And despite being hugely popular with her 978k followers, it seems Amanda's number one fans - Ant and Dec - just couldn't help but pay homage (somewhat) to mother-of-two.

Finding the exact same shower backstage, the presenting duo smouldered for the Gods into the camera, showing off their calves in identical poses to Amanda's.

The star's wrote 'Inspired by @noholdenback yesterday #bgt' alongside a crying face emoji.

And it looks like the boys weren't the only ones to find it eye watering hilarious as Amanda commented 'This is genius' followed by several crying with laughter emojis.

This year's Britain's Got Talent will see the Geordie lads reunited once again after Ants hiatus from our TV screens following a drink-driving incident last year. 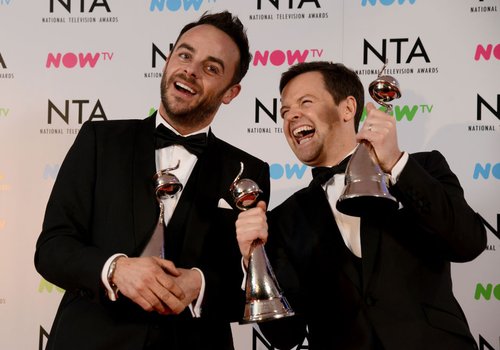 The star who was found to be two times over the drinking limit was fined £86,000 and was banned for 20 months after pleading guilty to the crime.

Almost a year on from the incident, Ant is back with his childhood co-host Dec ready and filming for the 13th series of BGT, also scooping up their eighteenth National Television Award for Best Presenters last month.