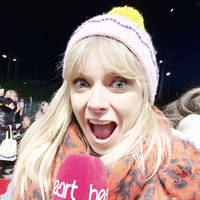 On this week’s episode of the Heart Showbiz Hub Podcast, Ashley Roberts catches up with Bros member Matt Goss... and he's got romance on his mind.

Matt Goss couldn't help but charm Ashley Roberts when they chatted about his new charity single.

The Bros star, 51, told the Pussycat Dolls star that he’s on the lookout for a new girlfriend, and he made no bones about the fact he’d like it to be her.

The pair caught up about his charity single, a cover of Alicia Keys' song If I Ain’t Got You. It was supposed to be the first single from his new record, which he recorded with producer Babyface. But instead he has decided to release it now alongside a JustGiving page he has set up, to raise money for the NHS during the global pandemic.

However, when Ashley and Matt were chatting, Matt seemed quite keen to flag to Ashley that’s he’s available.

He said: "I live by myself, a single man - except me and my crazy French bulldog.

"It makes me focussed on what I want within my love life, it focuses you on so many levels.

"The thing about being single - I’d rather be single than be here in a relationship that was dysfunctional. I wouldn’t trade my peace for anything."

And that wasn't all, he also really wanted her to know what he was looking for in a relationship.

The suave singer, who has enjoyed huge success in Las Vegas, added: "I wanna get married, I want to have a peaceful life, I wanna travel with my partner. I think it’s really important not to compromise your heart, I think it’s the most valuable thing you can give to anybody.

And what he’d like to do when he can get back to the UK? "I do want to come home, put my three-piece suit on, walk through St James’ Park, and feed the birds.

"I’m quite an old-fashioned guy in many ways. I am an old-school modern man."

Until finally he couldn’t wait any longer and bit the bullet, asking Ashley out, saying: "Er yeah, hit me up if you’re single."

You can hear her reaction on this week’s Heart Showbiz Hub Podcast!

ALSO ON THIS WEEK’S EPISODE: Hear our interviews with Emma Willis, Giovanna Fletcher and Michelle Collins, as well as this week’s Industry Myth Buster - what’s it like to be recognised when you’re out and about in public?