What happens to Gray Atkins in EastEnders and will he be found out? Find out all the spoilers...

After months of abuse, Chantelle (Jessica Plummer) tried to escape the clutches of Gray (Toby-Alexander Smith) but was forced back to Albert Square after pressure from her husband.

She then bravely stood up to Gray, but in a fit of rage he pushed her and she fell back onto the dishwasher and some sharp cutlery.

Evil Gray then left Chantelle to die, before walking through the market to give himself an alibi.

But will Gray get caught for the murder or will he walk free? Here’s what we know…

Does Gray get found out in EastEnders?

Gray has already been questioned by the police concerning Chantelle’s death, but he pretended he had no idea what happened and broke down in tears at the station.

Read More: EastEnders Stacey Fowler spoilers: What did she do and will she go to prison?

He was soon let go and headed back to Walford, where Karen Taylor (Lorraine Stanley) ran over to give him a hug.

However, Mitch Baker (Roger Griffiths) has become suspicious of his daughter’s husband after his showdown with Kheerat Panesar’s (Jaz Deol) in the middle of the Square.

During Thursday evening's episode, Kheerat then revealed to Mitch that he and Chantelle were planning on running away together, as she was unhappy with Gray.

Kheerat then admitted he thinks Gray is responsible for Chantelle’s murder after finidn out about the escape plan.

When a shocked Mitch later suggested this to Karen, she was horrified and kicked her husband out of the flat.

EastEnders boss Jon Sen has since teased the aftermath of the murder, saying there is more heartbreak ahead for the Taylor family.

Jon continued: “Reflecting the complexities behind a character like him, rather than portray him as purely evil, because in trying to humanise it, it stops it feeling too ‘other’ for the audience.

“We wanted to be very clear that domestic violence like this exists on a sliding scale, the characters and their personalities are much more common than anyone would have you believe – they live amongst us.”

It’s not clear yet whether Gray is leaving EastEnders, with actor Toby-Alexander Smith keeping quiet about his character’s future.

Appearing on Loose Women, he said he was honoured to be involved in the storyline to help raise awareness about domestic abuse.

He said: “If it means people are talking about the storyline and calling him out on his behaviour, it’s fine.”

Toby explained: “We were coming from the angle of, ‘What is going to have the biggest impact?’

“We could have left it as a surprise but it could have been a massive trigger for survivors watching it.

“I think it was the safest thing for them to do.”

If you have been affected by this storyline and need information and support, please email Women's Aid helpline@womensaid.org.uk. 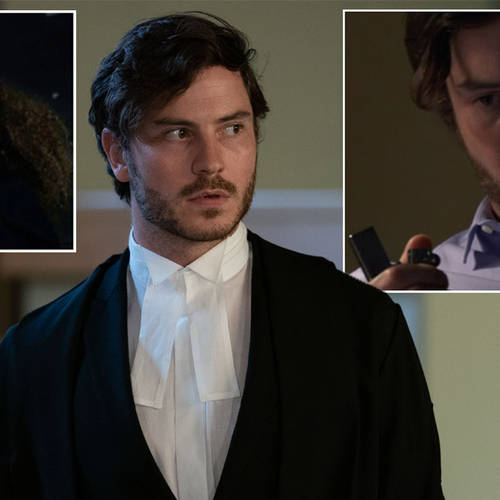