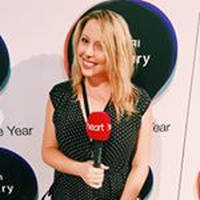 EXCLUSIVE: The singer told Heart a Rocketman-style biopic could be on the horizon - and he and wife Ayda are hoping for baby number four.

Robbie Williams' has opened up about his family life and plans for the future in a new interview - and revealed six-year-old daughter Teddy has already got a taste for luxury.

The 45-year-old singer told Heart that he and wife Ayda Field's oldest, 6, is starting to find his jet-set lifestyle “normal”, explaining what happened when she took a trip to the US recently.

He said: “She was getting on a plane the other day as mum took all the kids to San Fransisco to see their cousins.

“And she was like ‘Mummy are we getting a private plane?’ and when Ayda replied ‘no darling we’re not’, she looked at her quizzically and said ‘but I’m my daddy’s daughter’.”

“It was like oh wow what have we created? She will have a rude awakening at some point in her life.”

The best cover of Angels I've ever heard ❤️😍

Robbie and Ayda are also parents to son Charlton, four, and baby Collette who they welcomed via surrogate in September last year.

The pair kept their third baby secret, surprising the nation when they announced the happy news with an adorable Instagram post a few weeks after she was born.

And despite the couple now looking after a young family of three, Robbie told us his relationship with actress Ayda has never been better after 13 years.

He said: “We’re on good form as a couple, we actually really like each other which is incredible to say.

“I think love takes care of itself, you can either be in it or out of it, but sometimes it’s difficult and I like my wife a lot.

“I’m very, very pleased to see we’ve been together 13 years now and I definitely love her more than when I first met her and I even like her more than I ever did too.

He added that the pair's flourishing dynamic also carries on at home, with each of them dedicated to giving their brood the best upbringing possible.

Robbie said: "I’m dad, dad goes to work, I have a responsibility to keep this ship going.

"Then I come home and I’m daddy but we all have our responsibilities to fill and I seem to be fulfilling mine adequately."

He added that the couple have even discussed another child, but never imagined having such a big family.

Robbie said: "Considering I didn’t want one, it’s a turn out for the books that we now have three and hopefully want four.”

As well as another baby, Robbie admitted that he is toying with the idea of turning his life in to a musical, similar to Elton John biopic Rocketman, or Queen tell-all, Bohemian Rhapsody - and he already has an inkling of what he would call it.

He said: "I’ve got so many fingers in so many pies right now, a musical would be one of them.

"It’s just about coming up with a good idea. But my life has been pretty colourful, maybe that’s the good idea."

Until his life story - from Stoke to Take That to LA to fatherhood to X Factor - gets the theatre treatment, Robbie will be focusing on his new gig as co-owner of LMA, The University Centre for Music, Performing Arts and Creative Media, in Liverpool.

The singer fought for the centre’s LMA Choir on The X Factor when he was a judge last year, and will also help launch a new London campus in 2020.

Speaking to us about the choir, he said: "I love LMA, I instantly fell in love with them and they instantly felt like family, I could see in their eyes they adored me and I adored them back it was just simpatico and a mutual love fest."

Teasing some details about their upcoming performance together at British Summertime, he added: "They’ll be performing their own stuff on a separate stage set up there, I can’t give away spoilers but they will be there and they will be singing with me."