Britney Spears announces 'indefinite' hiatus to care for her father

The singer has put her Vegas residency on hold.

Pop star Britney Spears is taking a step back from her career to look after her father who is reported to be suffering from a life threatening illness.

The Toxic hitmaker announced that she will be putting her Las Vegas show - Domination - on hold 'until further notice' revealing that the decision was a 'tough' one have to make.

Explaining to her fans on social media, the 37-year-old said: 'I don’t even know where to start with this, because this is so tough for me to say. I will not be performing my new show Domination. I’ve been looking forward to this show and seeing all of you this year, so doing this breaks my heart.

'However, it’s important to always put your family first… and that’s the decision I had to make. A couple of months ago, my father was hospitalised and almost died. We’re all so grateful that he came out of it alive, but he still has a long road ahead of him.'

I don’t even know where to start with this, because this is so tough for me to say. I will not be performing my new show Domination. I’ve been looking forward to this show and seeing all of you this year, so doing this breaks my heart. pic.twitter.com/kHgFAVTjNA

Britney, who also has two sisters Jamie Lynn,27, and Bryan, 41, thanked fans for their support, adding: 'I appreciate your prayers and support for my family during this time. Thank you, and love you all… always.'

Just two months ago, Jamie Spears, 66, was admitted to hospital and taken in for surgery after his colon ruptured.

Post operation, the father of three was sent home where he was expected to make a full recovery.

In a statement at the time, Britney announced that she would be taking a short break away from the stage to support her family whilst also announcing that she was also looking 'forward to the time when I can be back on stage performing for all of you'. 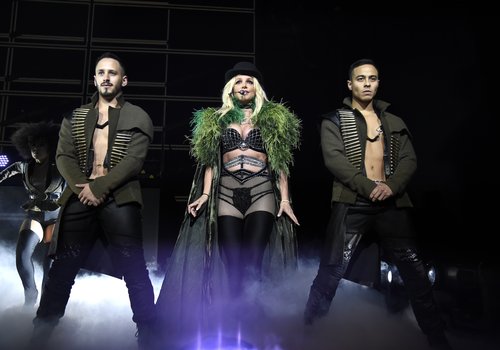 The announcement of Britney's Domination tour came exactly a year after a successful run of her Piece Of Me Residency in Las Vegas also.

The sales of the original tour were so great, that the star extended the Piece Of Me Residency - which started on the 27th December 2013 - for a further two years after it's initial two year contract ended.

Her first four years of residency's in LA grossed a massive $138m.

The singer was reportedly set to work on her 10th studio album after her residency this year.