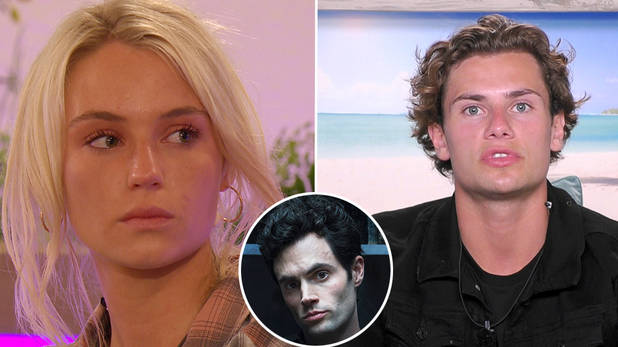 Last year's contestants, Dani Dyer and Sam Bird, call Joe out for his reaction to Lucie hanging out with Tommy.

Last year's contestants, Dani Dyer and Sam Bird, call Joe out for his reaction to Lucie hanging out with Tommy.

And it seems last year's contestants also feel his reaction was off the mark.

Taking to Twitter during the show, Dani Dyer commented: "Just wanna give Lucie a cuddle they need to chill out leave the girl alone."

While Sam Bird stated: "Joe telling lucy its time to start spending more time with the girls and not the boys is a horrendous thing to say, who cares who’s she’s friends with! #loveisland".

It came after Amy called Lucie out for not spending enough time with the other girls in the villa. Lucie then tried to smooth things over with Amy - but that didn't seem to be enough, as the air stewardess continued to talk to new girls Elma and Maura about Lucie's lack of involvement.

Things then blew up, as Lucie confronted Amy about gossiping about her behind her back, before Lucie seemed to take her frustration with the situation out on Amy during the Bridezilla challenge last night, in which the girls had a big food fight.

In another bout of drama, Amy ran inside the villa in tears, as the girls told Lucie off for the way she acted. Not knowing the Amy was upset, Lucie then tracked her down to apologise for offending her, then spoke to her pal Tommy Fury about the whole situation.

If that wasn't enough, Lucie partner Joe then turned against her, calling her out for being so close to Tommy - describing their closeness as "weird" and saying Lucie should hang out with the girls more.

As the Love Island pair faced recoupling, Joe said they'd had a few "issues" of late, but he was still wanted to be with Lucie.

Fans kicked off on Twitter, then, describing Joe's behaviour as "manipulative" and likening him to serial killer Joe from Netflix series, You.

Realllyyyy?!!! If a guy tried to tell me I couldn't be friends with other guys i'd be like cyaaaa!! How would Joe and Lucie work on the outside when all her friends are guys?! #LoveIsland

Lucie is probably the least shadiest girl in the villa and she's been nothing but nice but sis is out here crying every night because she feels so alienated thanks to Amy's manipulations. And to make things worse now Joe's turned too #Loveisland pic.twitter.com/IPxD44gIVc

how tommy's gonna end up if he doesn't stop talking to lucie when joe is watching #loveisland pic.twitter.com/SrG9G1DE2w

Joe and lucie havin a chat round the fire pit on love island #loveisland pic.twitter.com/Qg1PUcIZd8

joe when lucie talks to a guy #loveisland pic.twitter.com/98baR5nW0y

Me watching joe get angry and overprotective towards lucie because she male friends: #Loveisland pic.twitter.com/ZO70bdmT47

Joe: *starts with his controlling ways*
The uk: #loveisland pic.twitter.com/fVSozRaKIo