Dee gave birth to a baby girl on Friday

Pro fighter Conor McGregor may not have started the new year off with a fight but he's certainly winning after welcoming his second child into the world with partner Dee Devlin.

The 30-year-old dad-of-two became a parent for the second time around just yesterday (Friday 4th January) and the rumour mill is already going crazy with speculation over which name they've chosen for their new princess.

The fighting champ revealed the news of his daughter's birth in a sweet Instagram post at Coombe Women & Infants University Hospital, walking in hand-in-hand with his son Conor Jr in one hand and the addition to the family in the other.

Heading home with my two healthy babies and an energized and healthy SuperMam 2019 is off to the best start! Thank you for the well wishes everybody!

A post shared by Conor McGregor Official (@thenotoriousmma) onJan 4, 2019 at 8:57am PST

Captioning the adorable snap he wrote: 'Heading home with my two healthy babies and an energized and healthy SuperMam.

'2019 is off to the best start! Thank you for the well wishes everybody!'

And what have they named their new bundle of joy?

Well, according to reports from the Irish Daily Star, McGregor's daughter is named Croia, a Gaelic name which may mean 'of the heart' or 'little heart'. How precious! 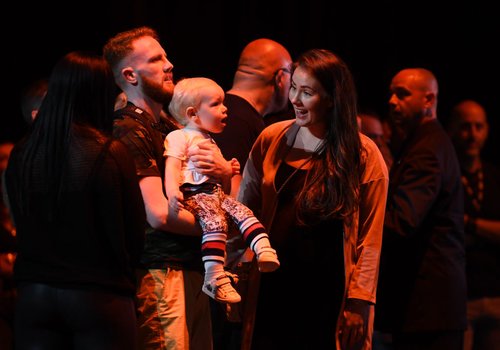 The childhood sweethearts met when Conor was just 19 and Dee was 20 after the now pro-fighter quit his plumbing apprenticeship to embark on a fighting career.

The couple also have a son named Conor Jr who Dee gave birth to in May 2017.

Speaking previously on becoming a father for the second time, McGregor said: 'Fatherhood is such an amazing thing, because it made me just realise what's important.

'If anything, I feel the pressure is off my shoulders even more so.